skip to main | skip to sidebar

CLARENCE CHAMBERLIN: THE MAN
WHO WOULD BE LINDBERGH
Charles Lindbergh earned everlasting fame for being first to fly non-stop across the Atlantic, on May 20, 1927.

The second pilot to accomplish that feat--Clarence Chamberlin, who has a Panama City connection--has been largely forgotten. But for an untimely legal dispute, in fact, Chamberlin would have beaten Lindbergh across the Atlantic and into the history books.

Chamberlin, born in Ohio in 1893, learned to fly as an employee of an advertising tow-sign company. In 1927 a $25,000 prize was offered to the first pilot to cross the ocean.

Chamberlin, ready to fly, was delayed by a dispute over ownership of his plane. By the time the matter was settled, Lucky Lindy had left for Paris.

Fifteen days later, on June 4, Chamberlin (and businessman Charles Levin) flew non-stop from New York to Germany. Chamberlin thus became the first man to fly a passenger to Europe. His trip of 3,911 miles had shattered Lindy's distance record as well.

In May 1937 Chamberlin flew state legislator Carl Gray from Tallahassee to Panama City. "It was evening," recalls local aviator Johnny Reaver, 84, "and there were no lights at the old airport. So Chamberlin flew up and down Harrison Avenue to attract attention. Finally, some cars drove to the airfield and shined headlights on the grass runway so they could land."

Chamberlin's weekend in Panama City was memorable, thanks to a child who had wandered away from his parents at the airport. "The world-famous flier," the Panama City News-Herald reported, "experienced his first stowaway yesterday. After gaining altitude on one of his numerous sight-seeing trips from the local airport, (Chamberlin) discovered four-year-old Nickolas Hutchings of Pensacola calmly enjoying the ride. Knowing their son's love for planes, the parents rushed to Chamberlin's plane when it landed. There they found Nickey, all smiles."

Chamberlin--who spent his later years designing engines and operating flight schools--died in Connecticut in 1976, largely forgotten. Had he crossed the Atlantic as intended, he'd have been remembered forever. And today Nickolas Hutchings would have one heckuva tale to tell the grandkids!

JOHNNY REAVER, FATHER OF THE "BIONIC GOPHER," HAS BEEN LUCKY AS LINDY

Reaver, then 12, stood in the front yard of his Columbus, Ohio, home and craned his neck skyward. "Charles Lindbergh flew over in his Spirit of St. Louis," Reaver recalled. "This was not long after his flight across the Atlantic. We knew he was coming so we ran out for a look. There he was, 1,000 feet above us. From then on, he was a hero to me."

Reaver would make flight his life.

Reaver came to Bay County in 1942 and was the area's first full-time pilot. From 1946 to 1960 he operated his own 35-acre airfield at 11th Street and Balboa in Panama City. The first student he taught to fly, Opal Pannell, became his wife.

Yet in a lifetime of flight--over 11,000 air miles--Reaver never suffered an accident. "My engine quit on me five times. Three times I landed at the airport, once on a highway, once on the beach. I've never put a scratch on a plane."

What is it about flying that has so consumed the man? "You see so much of God's beauty from up there," he said.

Now: about those Bionic gophers.

Glad you asked. In 1990 it looked like curtains for the Panama City Lions Club's annual Memorial Day Gopher Race. That's when the mean ol' Department of Environmental Regulation decided this particular species was endangered and couldn't be removed from its habitat long enough to raise $10,000 for charity.

Naturally this upset club members. The race had raised over $300,000 since its first running in 1961.To the rescue: Long-time Lion Johnny Reaver. "Most of the members," Reaver recalled, "figured we'd have less money to give to schools and charities. But I got to thinking about it."

What followed was a genuine epiphany, sheer genius, a necessity that spawned the Mother of All (Gopher-Related) Inventions--call it what you will. Out of the blue, Reaver lit upon the idea that earned him the title "Father of the Bionic Gopher."

(A gopher, incidentally, is Southern-speak for a tail-less turtle).

"I went into my garage," he said, "and took the body off a radio-controlled model car. Opal and I designed a turtle shell-mold to go over the chassis. I made the heads and Opal used sequins for eyes. Then we took the prototype to a fiberglass company."

It took some tinkering, but Reaver finally found the motor speed that would approximate the pace of a live gopher--a blistering four-tenths of a mile-per-hour. The sheer brilliance of Reaver's idea saved the day and allowed the Lions to continue their Gopher Race after all--although with robotic gophers in place of real ones.

Now, when each year's race is held (traditionally on Memorial Day Weekend) over 400 entrants typically vie for the highly-prized three-foot tall first-place trophy. The race is run in twenty heats with the winners eventually squaring off against each other.

Despite the event's overwhelming popularity and financial success, some long-time Lions remain wistful for the days when government agencies didn't meddle with turtles. "You're darn right I miss live gophers," said member Don Heaton. "How were they endangered? We bathed them, fed them, infused them with competitive spirit, and returned them to nature better off than they had been in the first place.

"If you were a turtle," said Heaton convincingly, "our race would have been the highlight of your life." 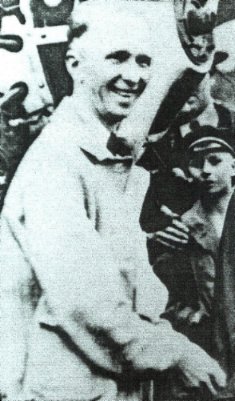 Above: Chamberlin. Below: his plane circa 1927 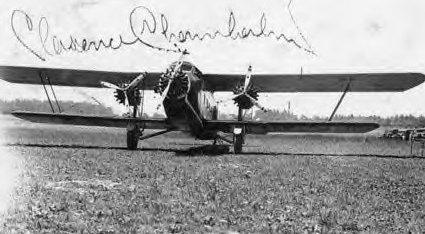 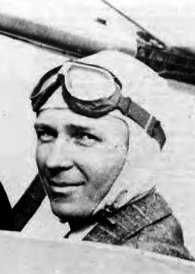 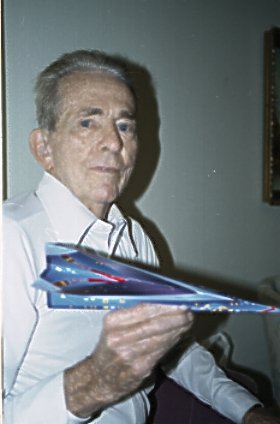 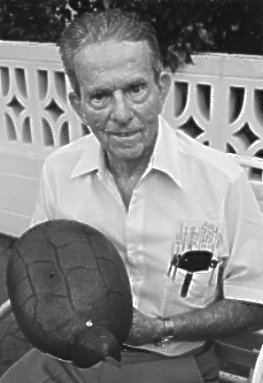 Reaver with his Bionic Gopher 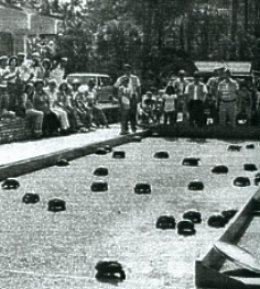 OTHER ARTICLES BY BROOKS: